Seriously? Yes, I am not joking. I like repairing stuff, not for the purpose saving money, but just want to see whether I can do it. It is fun to challenge something seem quite impossible. Ok, get the story short. I have a iMac for almost nine years. It’s an old, but still functioning good. Recently it show the issue of stripped screen as shown below. 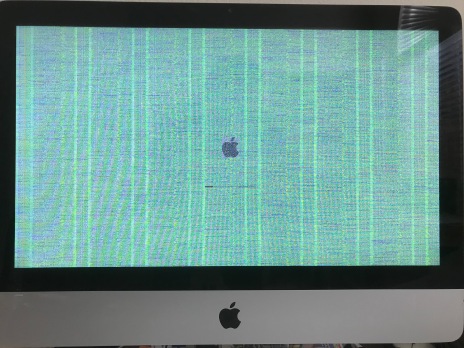 I know it’s time to change a new computer for this one. I have done some repairs to my home window PC and laptop longtime back, but have never seriously fixing some hardware issue on Mac. From what I read on the internet, it seems relating to graphics card. It would cost about $150 for a new graphic card, far exceed what this iMac is worth right now. Ok, let me find out whether anyone has fix similar issue before. Then I found this one: 2010 iMac 27″ Graphics Card Replacement.

It is a nice video showing how to open iMac and replace graphics card with a new one. It has a very good instruction in how to open iMac and take parts out. Mine was actually more complicated than this one and I had to take out the whole motherboard to get the graphics card. Then I found another video Burn the VGA and Fix your iMac – Don’t Pay Shitty Problems!!!. It’s insane approach to fix this striped screen issue: put the graphics card into oven with 380 F degrees for 8 minutes. This is probably the craziest idea to repair Mac I have ever heard. But from the comments, it seems it indeed fixed many people’s problem. Anyway, I am going to throw out this computer. So there is nothing to lose if I can fix it.

So my journey began during the Thanksgiving holiday. First I bought the required tools from Amazon: OWC General Servicing Kit for all Apple iMacs 2007 & Later. Actually the most useful tools are T10, T8 Torx Drivers and Suction Cups.

I followed the videos’ instructions to remove the monitor screen and take out monitor related stuff. Here is what it looks like when monitor is removed. 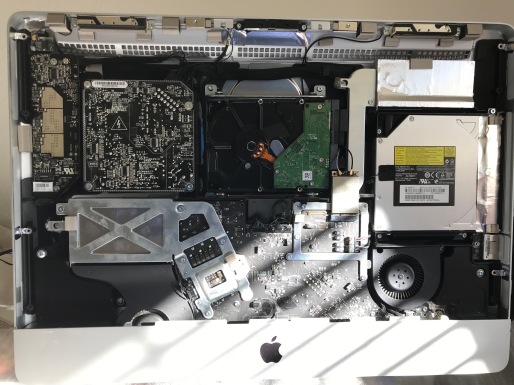 As you can see, Apple intentionally makes the repair work of iMac super painful. Everything is packed in this limited space with many wirings and cables. I was not even sure I can put back anything after I disassembly the iMac. After I removed many screws, the whole motherboard was still stuck there and could not be taken out. I reviewed the videos many times and still did not have a clue why it was still stuck. Finally I remembered I upgraded RAM before and know RAM is located at the bottom of the iMac. Maybe it was RAM. So I took out the RAM and tried again. Bingo! It was RAM. Here is the photo for the motherboard: 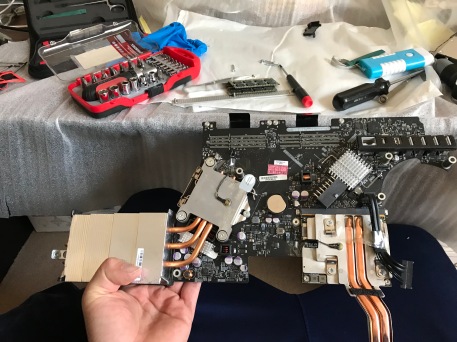 Checked the clock, 2 hrs passed. Get the graphic card out of motherboard is quite simple, just a few minutes work.

As the video instructed, I put the card in the oven (380 F degrees) for 8 minutes. Then took it out and cool off completely. I thought it might be easier to put them back. I was completely wrong. It took 200% to 300% effort to put them back in place. As the space is very tight in iMac, any small variation in positioning of motherboard would cause issue and had to redo the whole assembly process. Some issues are:

Finally after almost 10 times re-assembly process, I finally made it working. It shows the nice Apple logo. 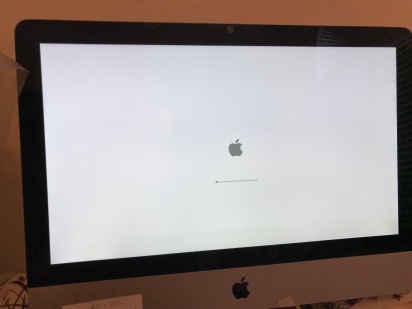 Exhausted after 9 hrs of work, but really had fun in fixing stuff.